This coil was wound differently than the first one. Instead of combining the phases as they were wrapped and skipping every other coil, I wrapped all of the first coil, 11 winds per coil, then the 2nd and 3rd.  Using a template printed from my design on the computer, I glued the coils together - staggering them by 1/3 the width of the space between magnets.

This time I made a decent mold for the resin. Chapstick seems to work pretty well as a release agent. It keeps the resin from bonding to the plywood.  I use the iron wire as a backing for the coils and mixed some iron filings in with the resin.  Note to self: Don't use blue styrofoam insulation as a base to pour resin onto. The resin gets very hot when it cures, and in my case, it melted the styrofoam under the mold, making the stator somewhat lumpy. Not too bad, but the stator should be as flat as possible to allow only a small airgap when it is mounted to the magnets.

After the new stator was mounted to the windmill I tested it with the drill again.  This time with the 3 phases connected in wye formation it made about 6 volts. Still very much lower than I was hoping for.  I tested the 3 phases individually and got 6, 4 and 2 volts. This tells me that my magnets are not strong enough to be effective with the outer 2 phases.  These ceramic magnets are 3/4 x 1/4 cheesy craft store caliber magnets.

I think that 3 phase is the way to go if you have strong enough magnets, but for now I'm going to just throw together another stator, single phase this time. I used bigger gauge wire and as many wraps as I could make fit in the space available.  By now, I shouldn't have to explain the above photos.

Because all these coils were wound individually, I had to wire them in an alternating fashion, clockwise, counter-clockwise, and so on, making sure my ac voltage increased with every coil.  After making sure they were all correct, I trimmed and soldered the wires. This coil put out about 12 volts.  I can live with that for now. I'm really sick of making stators. 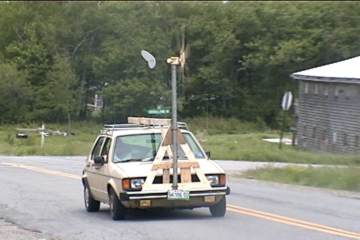 Another thing I wanted to experiment with on this windmill was a furling tail.  Notice that this tail will pivot in it's slot. The only thing that holds it at 90 degrees from the prop is it's own weight. It should give a little bit when a strong sudden gust hits it from the side, instead of jerking the blades into the wind. The vertical pivot point of the windmill is offset a bit from the horizontal pivot of the blade. In high enough wind, the blades will pivot sideways, spilling air until the pressure on the face of the blades evens up with the weight of the tail.  The round part that connects the tail to the body of the windmill can be adjusted to tune the fuling to a particular wind speed.  In the picture on the right, you can see it working although it has to be adjusted. It furled too early (15 mph) in that test.

Slap on some paint and put it all together. Now I need to figure out what to power with it. My real goals here were to try out this new Blade  Designer computer program, make and understand a 3 phase coil (ended up making 3 before I was done), and make an adjustable furling tail.

Just when I should be moving on to something else, I went and ordered some high power neo magnets from Wondermagnet.com. They are dozens of times more powerful than my original ceramic magnets.  I cut a new rotor out of 1/8" steel plate and a plexi-glass spacer for the magnets.  The magnets made all the difference.  Now when I bench tested the alternator I got 40+ volts and all kinds of amps.  We mounted the windmill onto the ReCyclone test vehicle and took off down the road.  I threw a wrong switch on our test panel and blew out all 6 of the smaller light bulbs.  The new magnets make it a much better generator, but now the problem is wind.  It will not turn at all in less than a 15 mph wind.

I think I am going to put the old rotor back on the windmill, stick a light on it and let it be.  The new magnets are worthy of a much bigger prop and better coils. Now that I've learned a thing or three by trial & error with this project I can get on to bigger and better ones.